Our previous tire trough blog post has always been the most popular post on the site.  But the old trough was just a tank.  We had to truck the water to it or rig up the gasoline pump and a lot of hoses and pipes.  Trucking water is bad, bad, bad, but it was our only option for years.  As our herd of grass fed beef cattle grew, we quickly outgrew our ability to truck the water to them.

With our new pond and buried siphon lines in place, this fall we moved the tire and plumbed it with a float valve.  Most of the pictures are from a couple months ago, hence the lack of snow and ice.  But I didn’t want to put this out there until I gave it a thorough shakedown. 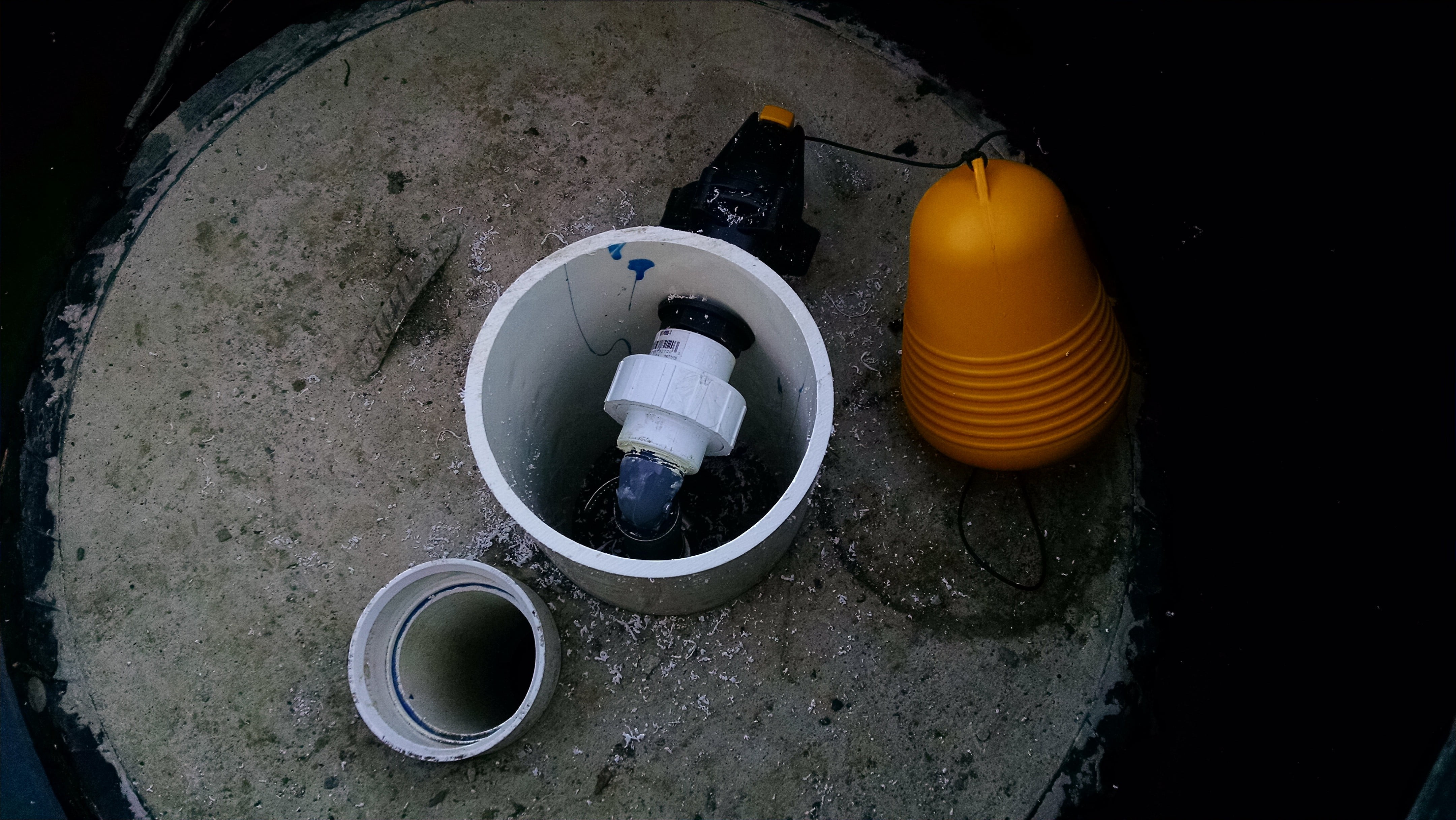 This time we installed plumbing through the concrete.  The center has a 6″ PVC sleeve around the supply line.  The last foot of the supply line transitions from plastic pipe to rubber hose because I wanted to give the pipe a little protection in case of any settling.  At the 1 o’clock position the float valve penetrates the PVC casing.  The valve wasn’t intended to be installed on the curved side of a pipe, so I made some rubber washers out of neoprene scraps and then gooped up both sides of the penetration with Lexel caulk.  If I were to do it over I’d go with an 8″ or larger casing; 6″ is a little too tight for making up the connections.  After everything was connected, I installed a 6″ rubber Fernco cap over the supply riser.

The overflow drain is in the 7 o’clock position.  Lots of folks have included overflow drains on their tanks, but I found this detail in a few tank designs and it made a lot of sense.  Instead of gluing the PVC fitting at the bottom of the tank, in this case its better to just friction-fit the pipe.  It will be water-tight (or tight enough) without glue.  Whenever I need to drain the tank for maintenace or winterization I just pull the pipe out of the hub down at the concrete level.  It works well.  The drain pipe leads downhill about 20 feet to keep any overflow away from rock and gravel pad near the tank.

How has the tank been for us?  Funny you should ask.  The answer is that it has been great during the mild weather, but not so great during the cold weather.  The problem really isn’t with the tank though.  The cattle are wintering in a field that has a few natural seeps that trickle water below a surface crust of ice during the most of the winter.  So while we’d prefer for the cattle to drink the clean water  we’re providing, they take the path of least resistance and drink from the seeps, no matter how fouled they become.  Without much usage the tire tank freezes up.  We’ve been chopping the ice daily, but not many of the cattle use the tank.  If the winter turns dry, cold, and snowless, then they’ll need the trough; otherwise it is redundant.  Next winter they’ll be wintering in a drier adjacent field and they’ll need to use this tank for their water, so the ice breaking chore may be easier then.  But for this winter the trough requires daily maintenance to keep it open.

Last weekend I drilled a 5/64″ weep hole in the overflow pipe and that slow leak seems to circulate enough warm water into the tank to reduce the ice build up, but that’s not enough to keep the drinker ice-free.

Would I build another tire trough?  You bet.  In fact I have.  I’ll show you the sow’s trough in a future post.  For the cost of materials, you can’t beat them.  They are wonderfully customizable.  I love that they are so tough.  The bull can ram all he wants.  I chop ice without worry about the axe punching through the sides.  I’m sold on them.