This year I’ve tried planting annual forage crops for the pigs and cattle.  I’ve been raising livestock and managing perennial pastures long enough not to be a novice, yet not long enough to be an expert.  But when it comes to cropping, I’m completely inexpert.  And my results this year certainly back up my claims to knowing that I don’t know anything.

In July I no-tilled Pearl Millet into a pasture.  I spent a little over $300 on that experiment, and that turned out to be a bust.  I have a few millet plants in the field, but only enough to give the cattle about an extra five minutes of grazing.  There are patches of thatch where we fed hay bales last fall and those are the only places that really took off.  I also planted a small test plot across the lane on some bare earth that a bulldozer had scraped down to subsoil and even there I got pretty good germination and growth.  My field looks nothing like what is seen in this video from Polyface Farm.

There are a lot of possible causes for this failure.  Some I can posit, but there are others that my inexperience prevents me from proposing just because I don’t understand all the ways plantings could go wrong.  There is the possibility the planter wasn’t drilling properly.  But I checked it periodically for seed flow, coulter cutting depth, and follower wheel compaction, and it always looked good.  I established that the drill worked equally well in both bare dirt and heavy hay thatch, so I’m going to say that the drill wasn’t at fault.  Fertility could be a problem, but I suspect that would have a bigger effect on later development, not initial germination and growth.  The fact that seeds have done well on the sun-baked bare subsoil also indicates that fertility isn’t the problem.  Our seeding happened just before a good rain, but was followed by  a few dry, hot weeks.  This should have been near-ideal for the millet and it should have been traumatic for the cool season grasses, but even with the weather, the hay cutting, and the repeated close grazings, the cool season grasses and legumes still managed to out-compete the millet.  Reflecting on all of this, I wonder if there is some allelopathy in our pastures that the millet isn’t able to overcome.  Perhaps one of our grasses or legumes is chemically antagonistic to millet, causing the millet to only be able to thrive in bare or mulched spots.  Occam’s razor would suggest I look for a simpler cause, avoiding the introduction of unknown allelopathies, but invariably I prefer explanations that point away from stupid stuff like operator error and instead recast me as locked in a monumental struggle against mysterious natural forces.

In May I tilled up a field and broadcast rape for the pigs.  The rape did germinate, but it took a long, long time.  Because of the delayed start, mustard and later ragweed got ahead and overwhelmed it.  The pigs were glad to graze the rape, but it didn’t generate enough volume to justify my effort or my out-of-pocket seed expenses.  Within short order the pigs stripped clean the entire plot (including stalks and roots), leaving only the ragweed.

Maybe this is indicative of stupidity, but I’m not done trying.  The rape field would remain a weedy mess for a couple of years if I just left it alone this year and let the cattle graze and trample it while it slowly transitioned back to pasture, so I figure it can’t hurt anything by having another go at this field.  This weekend I disced the ragweed.  My discs have fixed angles which doesn’t allow me to adjust penetration.  I added a 55 gallon drum of water to help keep the implement in the dirt, but even with all that weight it was hard to cut through all the weed stalks to get much depth.  I probably should have resorted to a first pass with a moldboard plow, but I don’t have one and there aren’t any medium sized plows in the neighborhood for me to borrow, so I did the best I could with the disc.  I broadcast planted the pig field with about 100 pounds of oats per acre, then I spun out a few pounds of rape seed just because I had it.

One this I did differently compared to the spring planting was to roll the field after seeding.  I borrowed a 12 foot cultipacker from my neighbor.  After using the roller, I think it could have been improved with more ballast on top, but I am hopeful that the machine will put the oats in better contact with the soil and push germination along. 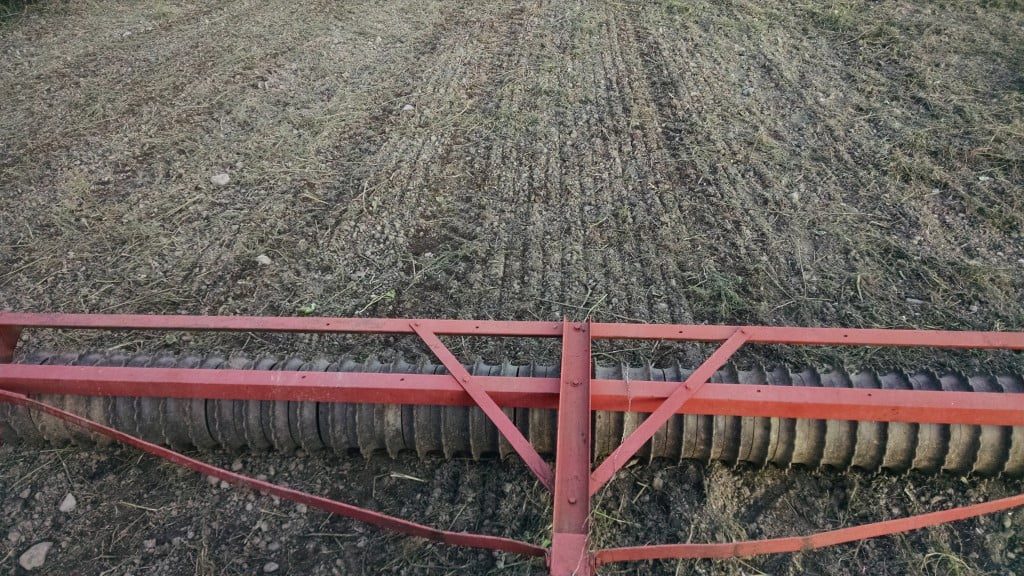 Planting the oats a couple weeks earlier would have been ideal, but I wasn’t able to pull that off.  I figure that it is still better to plant the oats as a cover crop rather than letting the ragweed have its way for the rest of the summer, and if it goes well I’ll have something for the cattle to graze in fall before the oats winterkill.  In the spring the field should be in good shape for a brave new attempt at growing annual forages.