I’m no ornithologist.  But I believe that the sandpipers that spend their summers in our neighborhood are Spotted Sandpipers. 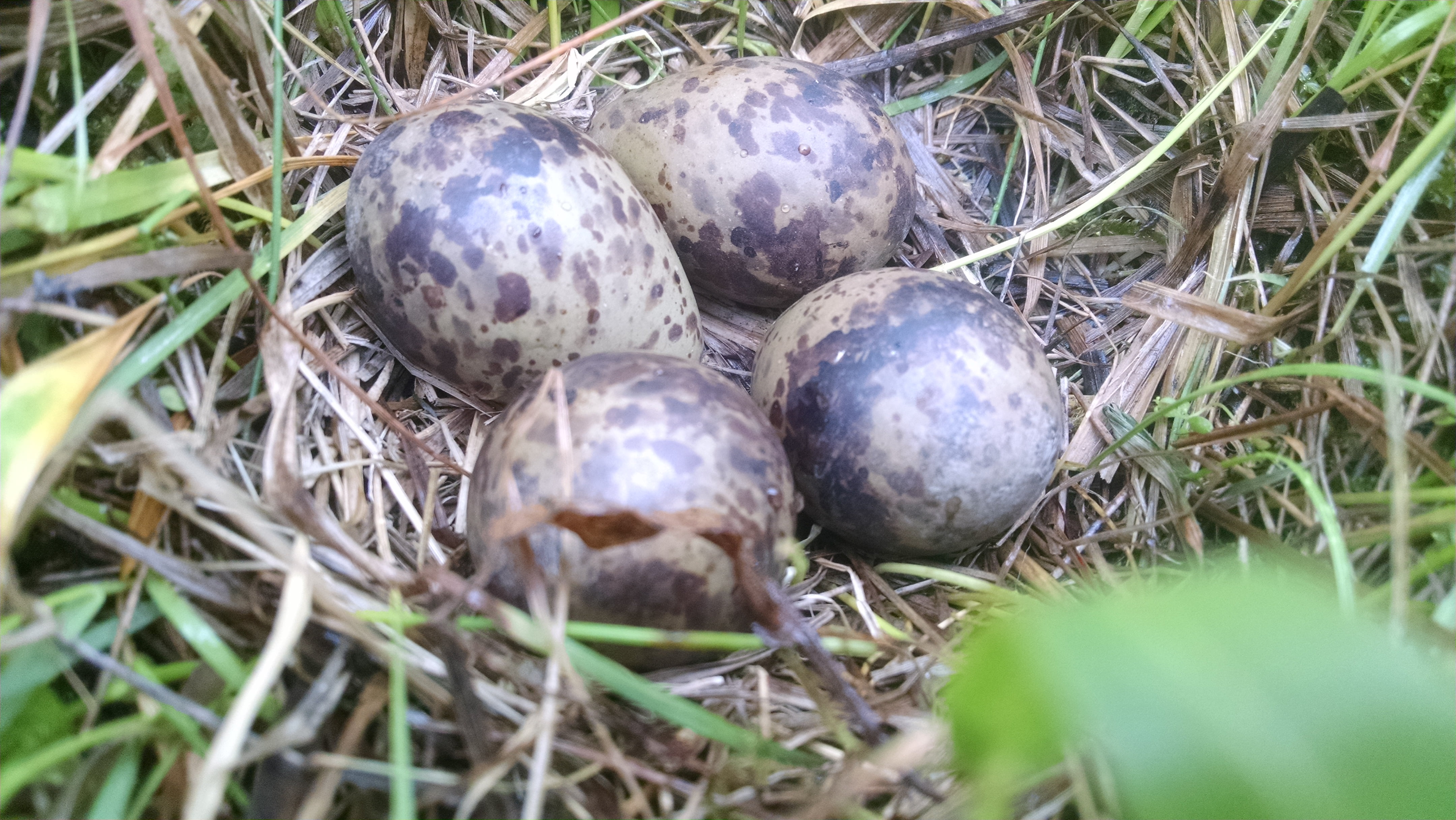 I found this nest while doing the morning cattle move.  The mother flopped and fluttered away when I approached, acting injured in order to draw me away from her eggs.  I’ve seen mallards do the same.  They put on a good show.

Cattle don’t intentionally harm birds, but they sometimes step on nests or eat all the cover camouflaging the sites.  Despite their diminutive size, I’ve watched redwing blackbird pairs harass cattle enough to keep their nests safe.  I don’t know if sandpipers would be able to mount a defense, since it seems to me that they tend toward flight rather than fight.  But I’m speaking from limited observation.  To allow this bird to coexist with the cattle, I fenced around the nest so the cattle won’t mess with it.

Putting cattle into a field with nesting birds means that inevitably some nests will be destroyed.  But I think we can accept some collateral damages and still have a system that is net-beneficial for wild birds.  Consider that some accidental destruction happens in “nature”, where wild herbivore herds trample nests.  And consider that the occasional trampling damage is minor compared to the depredations of all the animals that eat eggs (coyotes, racoons, snakes, various birds, etc.).  Migratory birds would doubtless agree with Tennyson’s bit about “Nature, red in tooth and claw”.

As long as we manage the grazing, I don’t think we’ll be deleterious.  But everything comes down to the details of our management.  We aren’t just raising cattle, we are managing a farm as a complete ecosystem.  We are managing the cattle, the grass, the water, the birds, the predators, the earthworms.  If we keep our cattle rotations fast enough, the cattle will only cover a patch of ground for a day or less, minimizing their opportunity to destroy a nest site, so the mother bird only needs to defend it for a short period.  If we stagger our grazing so that the same field isn’t grazed the same time each year we can ensure that only certain fields will be exposed to cattle during nesting periods.

While I’m sure there is plenty of room for improvement in our management, we’re heartened to note that bird populations have increased in our pastures during our tenure.

I received a few suggestions that what I actually saw was a killdeer.  I’ll accept that as a possibility, but I’m sticking to my sandpiper story for now.  We do have a few killdeer in that same field, but the bird I saw was spotted with more brown.  Also supporting my sandpiper theory is a blog entry from a few weeks ago by a farmer a few miles from here who is an accomplished birdwatcher (albeit the confirmed sighting was an upland sandpiper).  When I moved the cattle today, the bird was not on the nest, so I couldn’t make a corroborating observation.  Again, I’m not rejecting the killdeer out of hand.  I’ll allow for a high probability of error in my observations…

If I am correct about the sandpiper, then I need to make a correction to my narrative above.  I learned that the females are polyandrous and the males sit on the nests.  So it wasn’t the mother that was leading me away from the nest.  That’s a fun fact.

5 thoughts on “Spotted a Spotted Sandpiper”