In the middle of October we bought five yearling Angus-Devon cross cattle – two steers and three heifers.  They were sold at auction for a retiring farmer.  We’ve met the farmer and we know that his cattle program is well aligned with ours.  As a plus the Devons are from the same line as our bull so they are consistently bred toward a thick bodied, easy finishing, rugged phenotype.

We could write a few pages on the fiasco that ensued the morning after the cattle arrived, when a steer broke fences and led a bovine uprising that caused five cattle to head in five different directions.  But William Faulkner has already done a better job of describing the situation (albeit with auction horses) in his short story The Spotted Horses.

(F)or an instant of static horror men and animals faced one another, then the men whirled and ran before a gaudy vomit of long wild faces and splotched chests which overtook and scattered them and flung them sprawling aside and completely obliterated from sight Henry and the little boy, neither of whom had moved though Henry had flung up both arms, still holding his coiled rope, the herd sweeping on across the lot, to crash through the gate which the last man through it had neglected to close, leaving it slightly ajar, carrying all of the gate save the upright to which the hinges were nailed with them, and so among the teams and wagons which choked the lane, the teams springing and lunging too, snapping hitch-reins and tongues. Then the whole inextricable mass crashed among the wagons and eddied and divided about the one in which the woman sat, and rushed on down the lane and into the road, dividing, one half going one way and one half the other.

[Now for an excursus, I know that it is probably only English majors who read Faulkner, and then only because they have to.  But I’ll put in a good word for old Will and recommend that you give him a try.  Or try an audiobook — there are a number of great productions on Audible.  Nobody reads this blog for the book reviews, but some day I might subject you to a post on how ruralist authors inform and influence our farming (the list includes William Faulkner, Thomas Hardy, Wallace Stegner, John Steinbeck, Wendell Berry, and I’d throw in Peter Matthiessen’s Shadow Country trilogy for good measure).]

During the next weeks we recovered four of the five cattle where they had scattered on three different farms, but one steer remained at large for two and a half months.  The steer was so spooky and so fast that it became obvious that we weren’t going to be able to get him anywhere near a gate.  Meanwhile, he was showing up on the road at night, so we put out the “shoot to kill” order.

This week the neighborhood hunting club shot the steer while they were out looking for coyotes.  I heard the shots when I was feeding the pigs, so I went out to investigate and found them bringing in the body.  We were able to get him hung up and skinned that night.  Now he’s hanging in the cooler at the butcher shop.  We won’t be able to sell this as grass fed beef, since the steer was grazing corn stalks and probably stealing corn silage from the big ag bags down the road.  But it is OK that we can’t sell it, since a lot of the meat needs to go back to all the folks who helped bring in the steer. 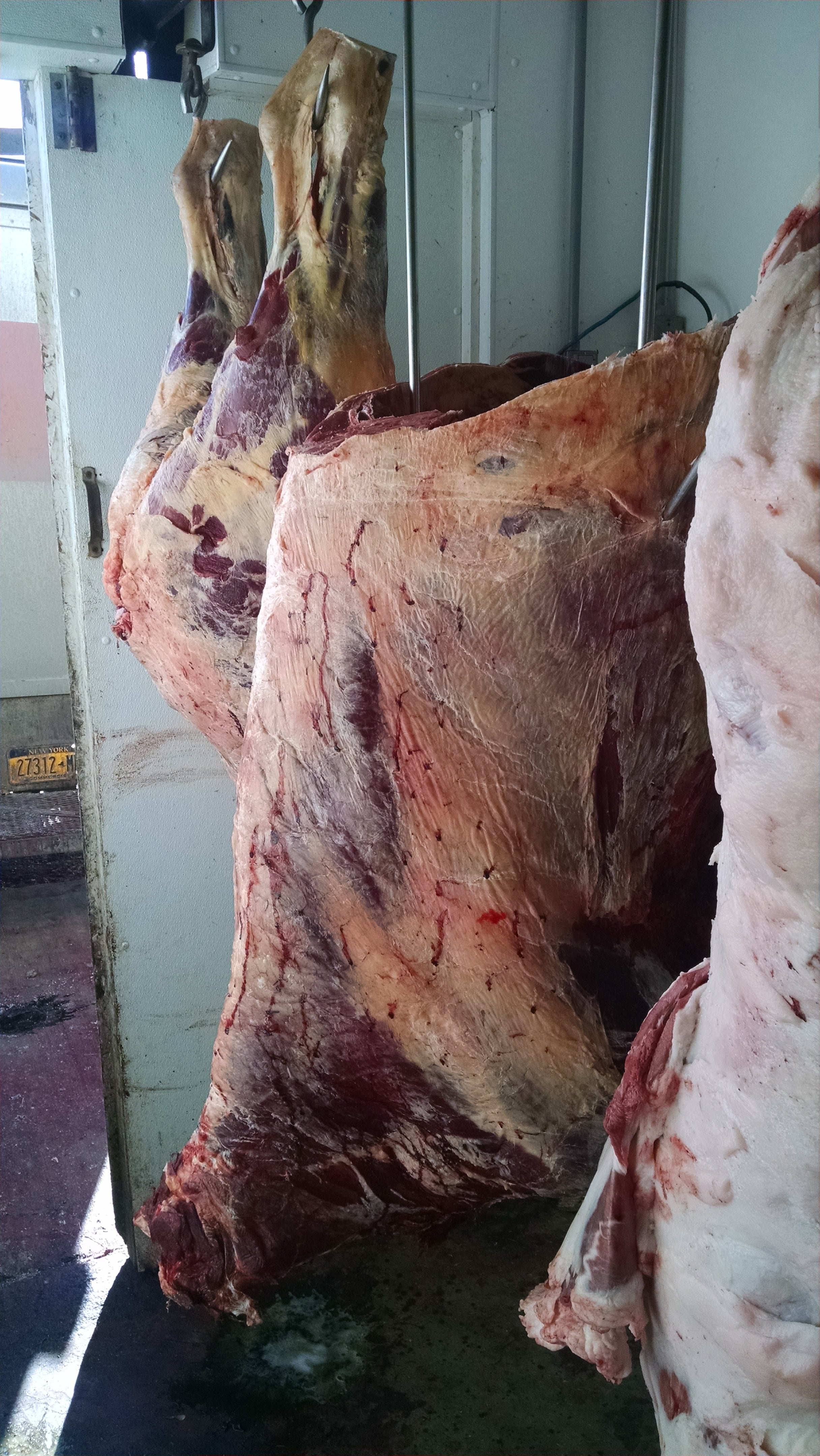 This fiasco has been an experience that we’d rather never repeat.  But the funny thing is that every time we tell the tale of woe to another person who’s been raising cattle, they reply with “Well, let me tell you about the time I lost…”.  So it is good to know that we might be the ones who messed up this time, but at least we’re not alone.  And the beef will taste all the better for that.

2 thoughts on “The Prodigal Steer”