“Put your faith in the two inches of humus
that will build under the trees
every thousand years.”

So I’ll start by honestly saying I can’t manage to take meaningful motivation for the thousand year view.  There are too many intervening potentialities.  But I want to manage my soil to be healthier six years from now than it was six years ago when I first came here.  And I think we are seeing some changes.  Here’s a little case study.

Last spring we were wrapping up our bale grazing and things looked awful.  We had an unusually mild winter with the cattle bale grazing in the wettest field.  So mud was everywhere.  Here’s how the field looked on 31 March 2016 as we were about to turn the cattle into the last few bales.  Our boots would get sucked off our feet as we walked out every other day to move the fences.  This was some mean mud.

I broadcast seeded some rape over the mud and let the cattle stomp it in, then I moved them off that field by early April.  Here’s what that field looked like in August, after one grazing in July and just before another grazing in September.

By August, the field shows no harm from bale grazing.  Understand that this field has been mowed once about ten years ago, but since then it as been left wild until four years ago when we first moved pigs through it.  Sure, there are woody bushes and all kinds of weeds, but there is also a rich diversity of high value forage here.  I’ve taken note that the rape germinated right on the patches where the hay bales were placed, so next time I only need to broadcast seed on the hay bales, not on the rest of the field.

Google updated their aerial photography for our farm on 6 October 2016.  Looking at that same location, I can see the checkerboard where all the bales were placed.  I can see the spots where some bales left a heavy thatch of hay that is still mulching the soil.  But I’m especially interested to see the change in grass color around each bale.  The deeper green color indicates improved fertility (especially being October when many of our grasses have gone dormant and the field are transitioning into senescence). 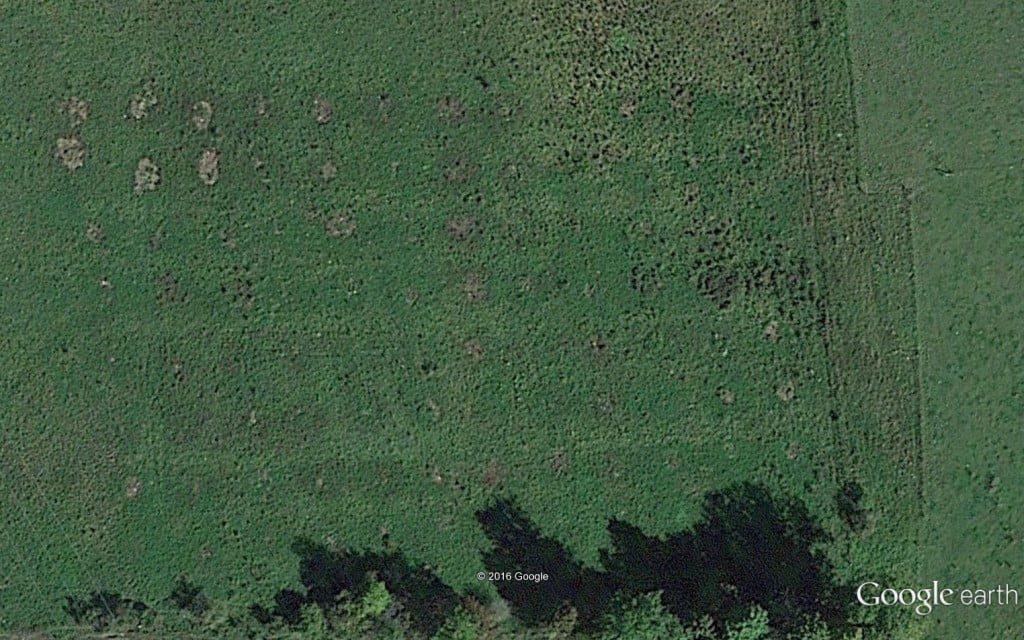 I’m pleased to see that the soil is becoming more productive.  This is something we’ll have to continue to manage.  Letting the cattle really hit one field hard for a winter is a tool to build fertility.  If we put them in the same spot continuously we’d just destroy the soil, so the management aspect is important.  For now it is encouraging to see evidence that we are making progress in increasing soil fertility.

People like to quote the inanity about insanity:  “The definition of insanity is doing the same thing over and over and expecting different results.”  I’ve got a cowpie ready for the next person who smugly says that…  Each year we keep doing the same thing knowing that slowly we’re changing the entire ecosystem of this farm.